Chucky comes from a professional basketball career that spanned 14 years, including 10 year in the NBA. Chucky finished his NBA career with a 10 points/game career scoring average and was a member of the NBA All-Rookie Team in 2000. Chucky is a graduate of South Florida where he majored in systems management.
Click here to see Chucky's Hub Content

Aaron Carter Hub Insider Twitter: Acecarterterps
Aaron Carter is completing his master’s degree in journalism as the Howard Simons Fellow at the University of Maryland’s Merrill College of Journalism. He has interned at the Washington Post and at ESPN’s “Pardon the Interruption.”

His background is in professional and collegiate basketball. In addition to playing college basketball, he is the son of former NBA player, coach and ESPN NBA analyst, Fred Carter.

Reginald Davis Hub Insider Twitter: rmdglobetrotter
As the Co-Founder and CEO of the company, Reginald Davis wears many different hats for the Usportshub team. He manages the day to day operations of the company in addition to being a featured contributor.

He is a former college basketball player and lifelong basketball fan. The son of Toronto Raptors assistant coach and former NBA player Johnny Davis, his roots in basketball run deep. After completing his MBA in International business at the University of Denver, Reginald Davis decided to pursue his passion in business and sports.

He focuses on player evaluations at the high school and college levels and has covered live AAU events as well as the NBA Summer League.
Click here to see Reginald's Hub Content

Johnny Davis Hub Advisor Twitter: UsportsHub
Johnny Davis was an all-american guard for the University of Dayton where he is now a member of their hall of fame. (1993 inductee) He played in the NBA with four teams over ten seasons from 1976–1986, winning an NBA championship in his rookie season (1976–1977) with the Portland Trail Blazers. He also played for the Indiana Pacers, the Atlanta Hawks, and the Cleveland Cavaliers.

Walter Davis Hub Insider Twitter: UsportsHub
Walter Davis is a former professional basketball player. A 6'6" forward/guard, Davis spent 15 years in the National Basketball Association, spending the bulk of those years with the Phoenix Suns. As a standout college player at the University of North Carolina, he was selected to play on the USA men's basketball team coached by UNC's Dean Smith that won the gold medal at the 1976 Summer Olympics.

Davis later broadcasted for the Nuggets, and has served as a scout for the Washington Wizards. In 1994, his number 6 was retired by the Suns, and in 2004 he was enshrined in the team's Ring of Honor. His nephew Hubert Davis also played basketball for UNC and in the NBA.

Cory Johnson Hub Insider Twitter: CoryRockne
After spending his rookie season in both Holland and Finland, Cory is currently competing in the LEB Gold division of Spain for Leyma Basquet Coruña.

Prior to a professional career, Cory spent the 2009-10 and 2010-11 seasons as a Co-Captain competing at Valparaiso University. During his senior year, he was selected as a Preseason Second Team All-Horizon League honoree and named MVP of the Lou Henson Award Tournament. He helped lead the crusaders to a 23-12 record and earn a spot in the postseason CollegeInsider.com Tournament. Before transferring to Valparaiso University, Johnson competed two seasons at Iowa State University, part of the Big 12 Conference, where he started 6 games as a freshman and was the Pete Taylor Mr. Hustle Award recipient.
Click here to see Cory's Hub Content

Robo Kreps Hub Insider Twitter: bigGamebball
Robo Kreps is coming off one year of professional basketball. He played overseas in Tbilisi, Georgia and finished runner-up MVP for the first half of the season while averaging 23 ppg.

While playing for the Illinois-Chicago Flames in the Horizon league, he lead his team in scoring both his junior and senior year. In high-school he led his football and basketball teams to state championships. While on the court, Kreps finished runner-up to Derrick Rose for Mr. Basketball.

Dami Oloruntoba Hub Insider Twitter: UsportsHub
Dami Oloruntoba is currently finishing his Master’s degree at the University of Maryland College Park campus. In high school, he played alongside current NBA pro Delonte West at Paul the lV, and was later part of two back to back conference championship teams during an outstanding career at Gettysburg College. His passion for helping young basketball player achieve their potential led him back to his high school alma mater. Oloruntoba is currently working on as a high school assistant coach under the tutelage of his former high school Coach Glenn Ferello in Fairfax, Virginia.

Chris Owens Hub Insider Twitter: cowens20
Chris Owens, a former University of Texas star and longtime professional basketball player joins the UsportsHub team as a featured insider. After playing college basketball at Tulane University and the University of Texas, Owens was selected by the Milwaukee Bucks in the 2nd round of the 2002 NBA Draft. He has spent the last several years playing in high-level European leagues for teams in Greece, Turkey and Ukraine.

Chris Sparks Hub Insider Twitter: CoachSparks5
Chris Sparks brings a range of experience to the UsportsHub team. As a player, Chris began his college career at Vincennes University where received the Mr. Hustle Award on a team that placed 6th at the NJCAA (D1) National Tournament. He then finished his career at Valparaiso University where he was a member of the famed 1998 team that made a run to the "Sweet Sixteen" in the NCAA National Tournament.

Chris' next stop was a head coaching positon with the Canterbury Rams of the New Zealand Professional National Basketball League where he was a coach of the year finalist. Chris then took an assistant coaching position at Valparaiso University with a primary responsibility in recruiting and defensive strategy. In addition to coaching and recruiting, Chris has helped in player development of nationally recognized talent and is currently the owner of the Chris Sparks Pro Player Academy.

Hub Contributors are experienced journalists and writers with a passion for college sports who work with Hub Insiders to deliver expert analysis with high quality presentation.

Scott Annis Hub Contributor Twitter: R_Scotty
Scott is a Junior at CU majoring in Creative Writing and is pursuing a career in sports journalism. He grew up in Thornton, CO but has spent time living in the Bay Area and North Carolina. Scott spends most of his time focused on sports. When he isn't writing about them or watching them he plays on the CU Rugby team.
Click here to see Scott's Hub Content

Alexa Ard Hub Contributor Twitter: AlexaArd21
Alexa Ard was born and raised in Las Vegas, Nevada. She is currently working on earning her Bachelor’s degree in journalism at the University of Nevada, Reno.

Throughout high school, Alexa competed on the varsity basketball team and trained at Impact Basketball. She no longer plays basketball due to knee injuries, but she knows that basketball is still a part of her. She wants sports to still be in her life, and she sees becoming a sports journalist as the perfect path for her.

Alexa is currently the assistant sports editor for the student-run newspaper, The Nevada Sagebrush, where she has reported on Nevada women’s basketball, women’s soccer, swimming, volleyball, softball and cycling.
Click here to see Alexa's Hub Content

Dave also is a veteran sports writer, and produced sports columns for the Duluth Budgeteer and Duluth News-Tribune for five years. He currently operates his own sports blog, which can be accessed at www.davelegarde.com.

Chris Longo Hub Contributor Twitter: east_coastbias
Chris Longo is a New Yorker who wandered out to the rolling hills of Athens, Ohio, to study journalism at Ohio University. He is currently a managing editor of Ohio University’s Backdrop Magazine and is a frequent contributor to a number of other publications. When Chris isn’t covering the Bobcats, you can find him yelling somewhere in Ohio’s student section, The O Zone. His sports journalism experience has taken him from covering the Nathan’s Hot Dog Eating Contest to interviewing some of the best athletes in the world at the 2012 Summer Olympics in London. An avid New York sports fan, Chris will someday ride off into the sunset when the Jets win the Super Bowl.

He joins the UsportsHub as a contributor and editor and requests you illuminate the follow on his twitter handle @east_coastbias for more college basketball talk.

Matt Mascolo Hub Contributor Twitter: Mascolomr
Matt Mascolo graduated from Allegheny College with a B.A. in Communication Arts. During his senior year, Mascolo served as the beat writer for the men's basketball team and helped launch the live stream of sporting events, where his role was head commentator for both basketball squads. Mascolo also was a four-year member of the Gator varsity football squad as a defensive back. He joins the UsportsHub team as a contributor and editor with a focus on Big East basketball. Mascolo is a lifelong basketball fan and blogger.

Danny Medlock Hub Contributor Twitter: DannyMedlock
Danny Medlock is a born and raised Bostonian, but currently finds himself a senior in the E.W. Scripps School of Journalism at Ohio University. His true home is Cape Cod where this summer he will intern with the Brewster Whitecaps of the Cape Cod Baseball League. When he's not on the beach, the basketball aficionado and sneakerhead serves as the managing editor for Speakeasyohiou.com. He is well versed in both MAC football and basketball and spent the summer of 2012 in London, covering the Olympic games with fellow contributor Chris Longo.
Click here to see Danny's Hub Content

Parker Stremmel Hub Contributor Twitter: PDubbStrem
A TV broadcaster by trade, Parker Stremmel has worked in sports markets on both sides of the country. Upon graduating from the University of Nevada, Parker worked at ESPN as an associate producer and a researcher. There, he earned a National Sports Emmy nomination for his work on ESPN's flagship program, SportsCenter.

After leaving The Worldwide Leader, Parker returned to Nevada, where he has worked for the NBC and ABC affiliates in Reno. He has been part of an RTNDA award-winning show, and was part of an Edward R. Murrow-nominated package on a Paralympic athlete.

Parker is proud to join UsportsHub. "UsportsHub has the chance to revolutionize the way we consume college athletics," Parker says. "It's exciting to be part of a team with so much extensive knowledge on the college game. I can't wait for readers to be amazed by the content provided by UsportsHub's staff."

In between spending time with his wife and being walked by his dog, Parker can be found yelling at the TV, rooting on the San Francisco Giants and the New England Patriots. 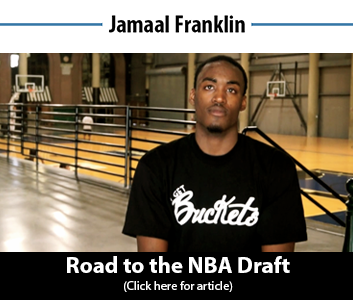